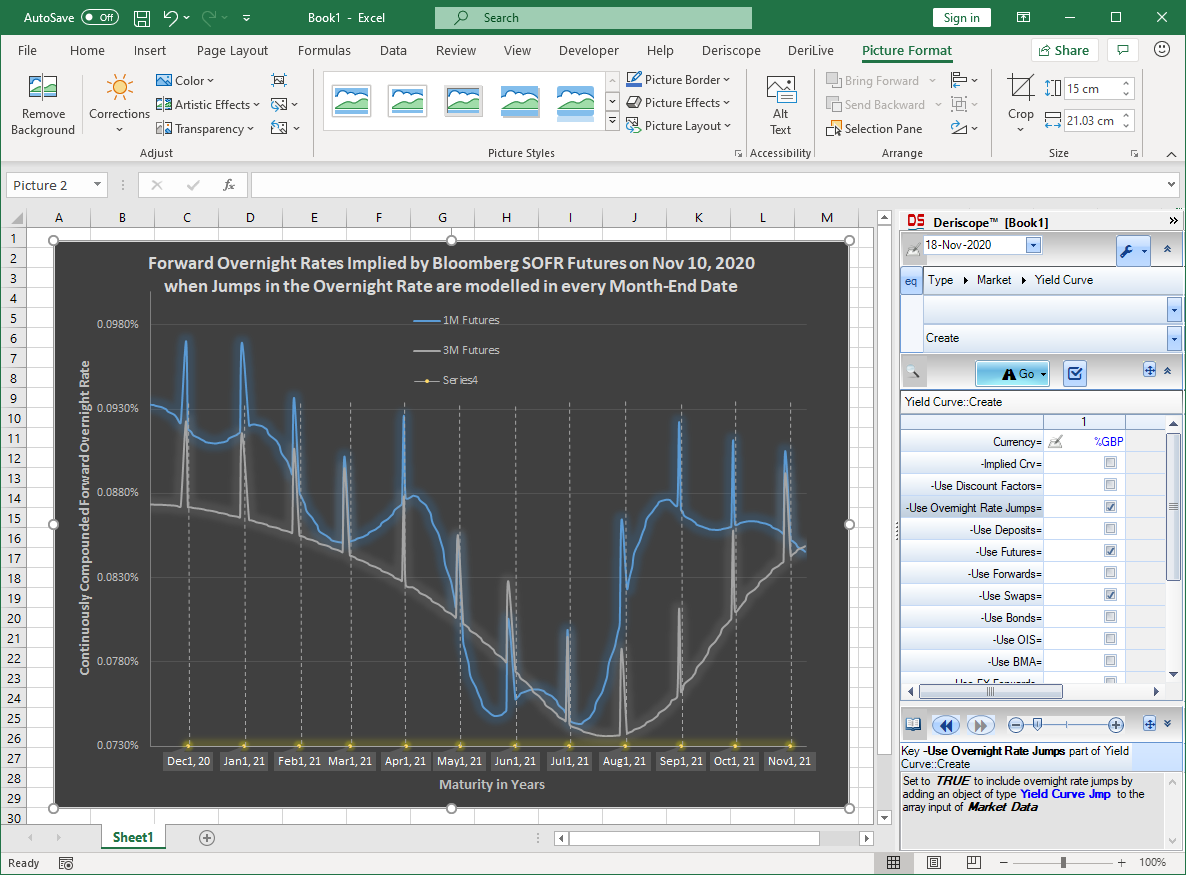 In my previous article about building a SOFR yield curve in Excel using QuantLib and Deriscope I was confronted with an unexpected result concerning the short term – less than two years – section of the curve.

The following two charts were produced that show the continuously compounded zero rates for every calendar maturity for the next two-years based on Bloomberg COB market rates as of November 10, 2020.

The second chart was produced out of 1-month and 3-month SOFR futures prices with a total of 16 expiries ranging from December 1, 2020 to November 1, 2021 during the first year followed by the two OIS rates for 18M and 2Y. 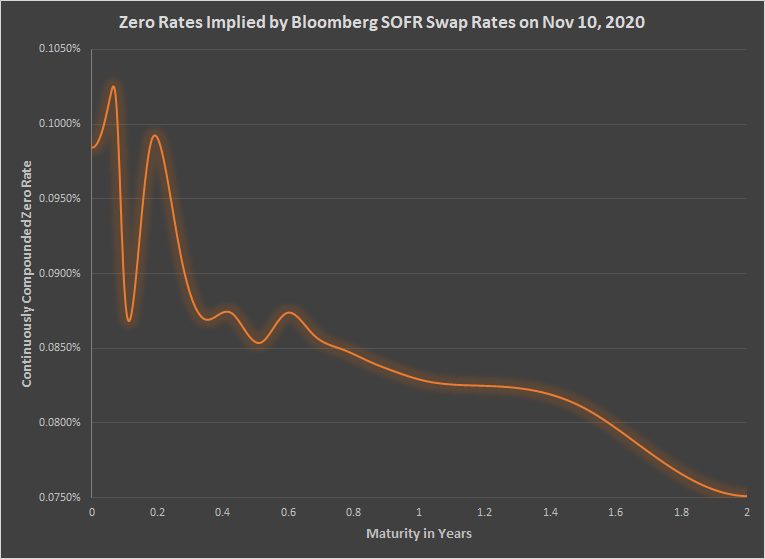 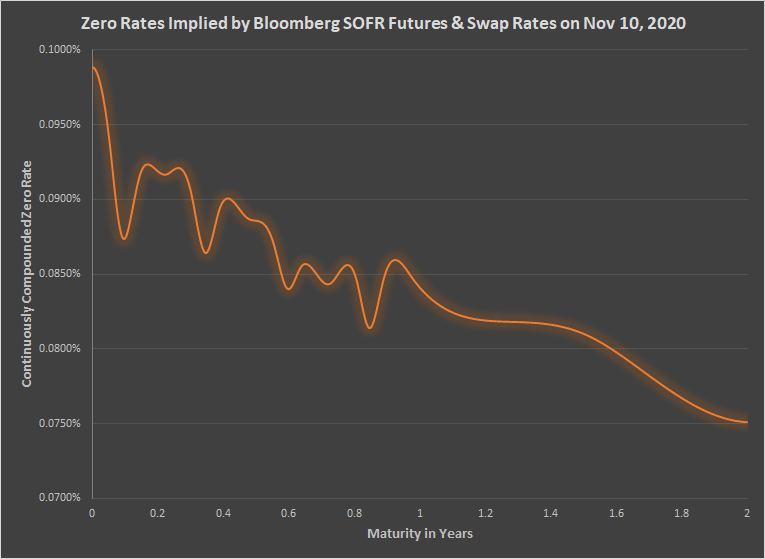 While the first curve's oscillations during the front 6 months could be explained away by suspected thin trading volumes in the respective OIS contracts, the second curve remained a puzzle.

My suspicion was that the bumps were caused by attempting to mix the two diverse markets of 1-month and 3-month futures. Even though both types of contracts reference the same underlying reference SOFR, their prices may still not be at synch with each other due to various market frictions that are idiosyncratic to their respective trading environments.

In order to investigate this suspicion, I decided to rebuild the curve twice using a) only 1-month futures and b) only 3-month futures, with the following results: 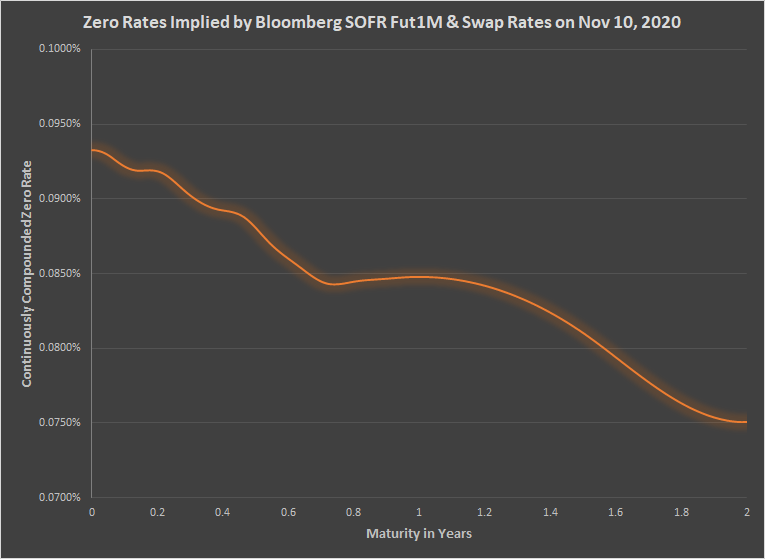 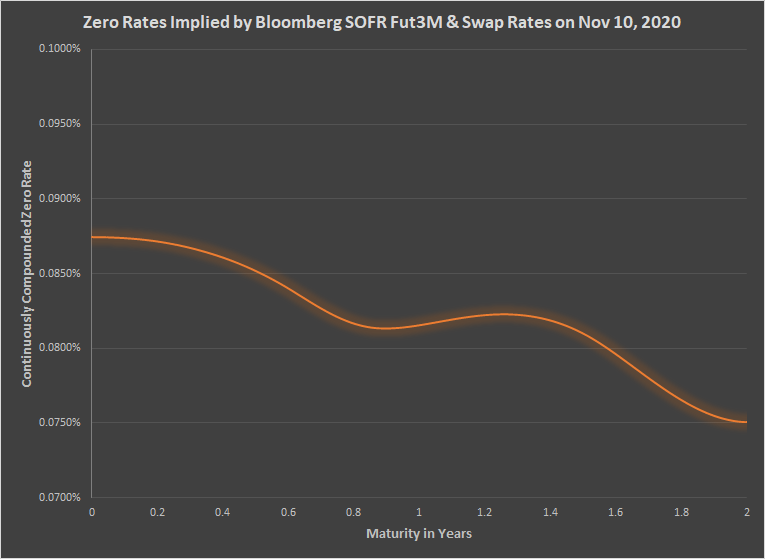 Indeed, this seemed to alleviate the problem.

Since these two charts differ only on the type of futures contracts employed during the first one year, it is better to concentrate on the first-year portion only.

Below is the chart with all curves combined, restricted in the first 12 months: 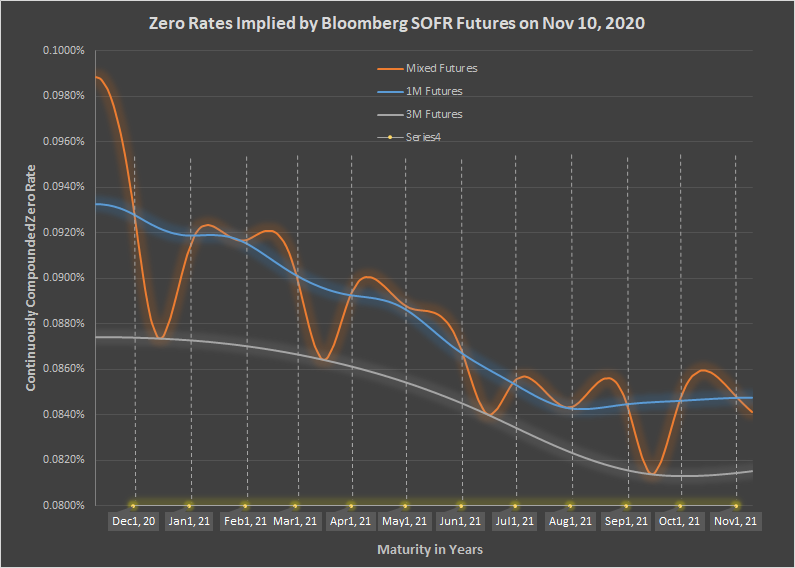 I have intentionally shown the zero rate maturity dates on the horizontal axis with the first day of each month explicitly labeled so that I can investigate a possible turn-of-the-month effect. These dates are also important because they coincide with the settlement dates of the 1-month futures contracts.

In general, the turn-of-the-month effect refers to a pattern of market prices displaying abrupt jumps on the last business day of a month. Such jumps are common on the stock market and have been also observed in various types of overnight interest rates with either positive or negative sign. They can be attributed to liquidity crunches or flushes following the rush of industry participants to meet end-of-month deadlines relating to a) actual financial obligations and b) balance sheet reporting to stakeholders or overseeing authorities.

My first observation is that the blue curve (1M futures) is consistently higher than the grey curve (3M futures), with a gap ranging from ½ to 1/6 of a basis point.

This indicates that the main source of the oscillations in the orange curve (mixed futures) is the attempt of mixing two disparate sources.

It may well be possible that the apparent disparity between the 1M and 3M futures implied curves is caused by a convexity effect embedded in the market prices of the 1M futures that remains unaccounted for by Deriscope. I am referring to the convexity effect that arises from the fact that the final settlement of the 1M futures is based on the arithmetic average of the published SOFRs rather than their compounded average.

If the 1M futures trading behavior is influenced either directly or indirectly by this convexity effect, the resulting market prices will differ from those calculated by Deriscope for any given assumption of discount factors. Reversely, the discount factors implied by matching the given market prices would be off by a certain amount that translates to the vertical gap in the two zero rate curves depicted above, whereby the grey curve corresponds to the "correct" discount factors and the blue curve to the "wrong" discount factors.

In the current post I will ignore both the possible convexity effect and the orange curve and instead focus on further smoothing out the blue and grey curves.

I am curious to find out whether the observed slight remaining oscillation is caused by a turn-of-the-month effect priced in by the market.

A single Deriscope formula suffices for calculating the several forward overnight rates implied by a given Yield Curve object for any set of forward maturities.

If you are not familiar with the Deriscope notions of objects and formulas, you are advised to visit my previous post on SOFR curve bootstrapping.

Below is the required formula in cell AK3.

I have greyed out the three ranges AG3:AH6, AK1 and AJ3:AJ252 that are passed as input to the Deriscope ds formula:

Note, this formula is entered in the single cell AK3, but returns a whole array of values as output, utilizing the new Excel's dynamic array feature.

that define the task at hand.

The next input cell AK1 holds the handle name &Fut1M.1 of a previously created object of type Yield Curve. It tells the function Forward Rate the yield curve to be used in the calculation of the forward rates.

The next input is the key-value pair Start Dates= AJ3:AJ252 that supplies 250 dates that are interpreted as the start dates in a series of 250 forward time intervals. The 250 dates in column AJ have been produced by a different Deriscope function named Date Sequence. These are consecutive business days from today = November 10, 2020 to one year later at November 10, 2021.

Finally, the remaining input is the key-value pair End Dates= AJ4:AJ253 that supplies 250 dates that are interpreted as the corresponding end dates of the 250 forward time intervals.

The rates in column AL are produced by the same formula copied over in cell AL3. 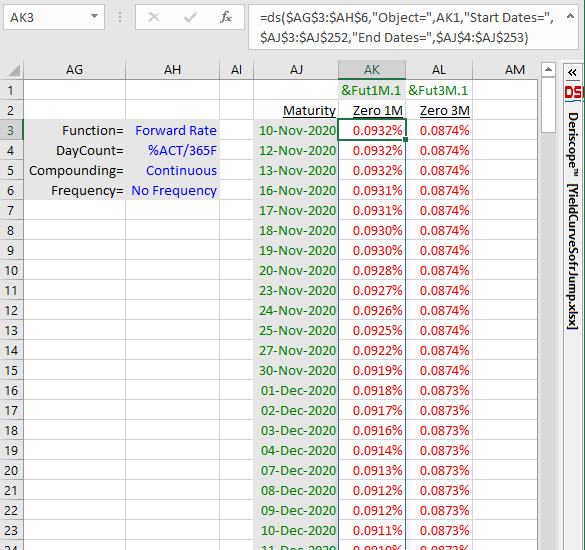 Below is the chart with the corresponding two curves of forward overnight rates: 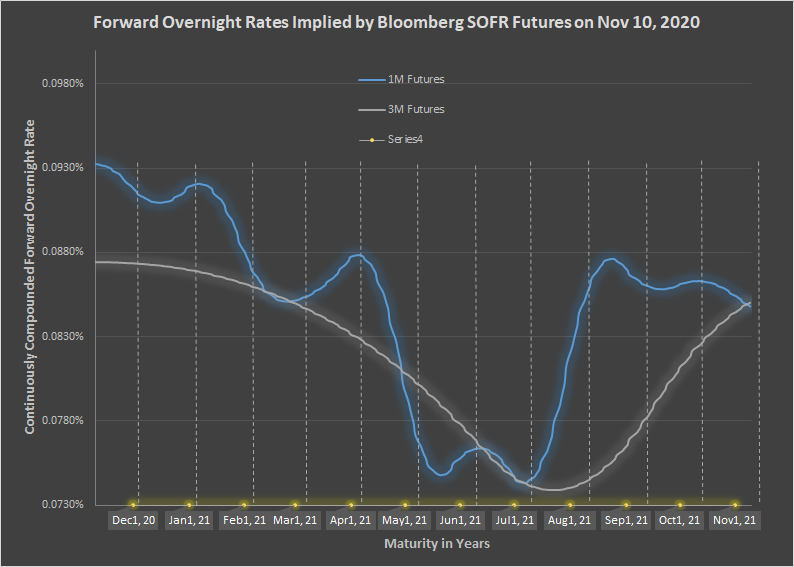 The next chart addresses the last point by depicting the behavior of the forward 3-month forward-looking rate as a function of the start date of the underlying 3-month forward interval.

The forward 3-month forward-looking rate for maturity T is similar to a today-observed forward term rate – such as Libor – expected to be set at T.

Instead, the forward 3-month backward-looking rate for maturity T is similar to a today-observed forward compounded over the interval (T – 3M , T) rate expected to be set at T. 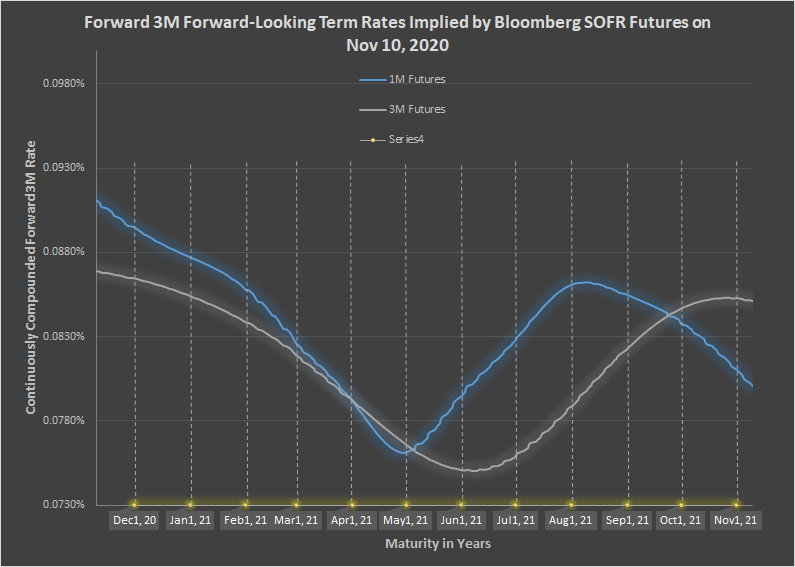 As expected, these curves are much smoother than those of the overnight rate.

Let's see if we can improve them even more by incorporating rate jumps in the curve construction.

Deriscope supports the building of a yield curve that a) matches the market prices of a given set of instruments and b) implies forward overnight rates that display pre-defined fixed-size jumps on specific dates.

The easiest way to set up the formulas that create a yield curve incorporating jumps is to check the -Check Overnight Rate Jumps box in the wizard during the selection of the instruments that will be used as input in the screen presented when the type Yield Curve is selected in the Type Selector, as shown below, where also the -Use Futures and -Use Swaps boxes have been checked in order to have the curve generated out of futures and swaps: 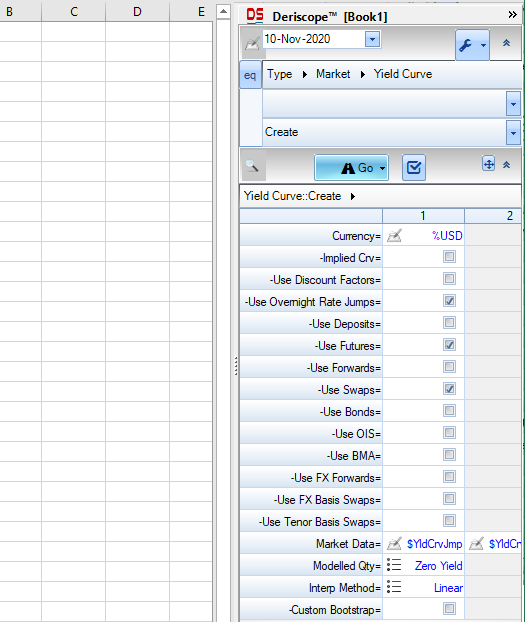 Then, clicking on the Go button would result in the wizard creating and pasting the required formulas under the currently selected spreadsheet cell.

After making a few manual adjustments, the final formula that creates the Yield Curve object is as shown below in cell A1: 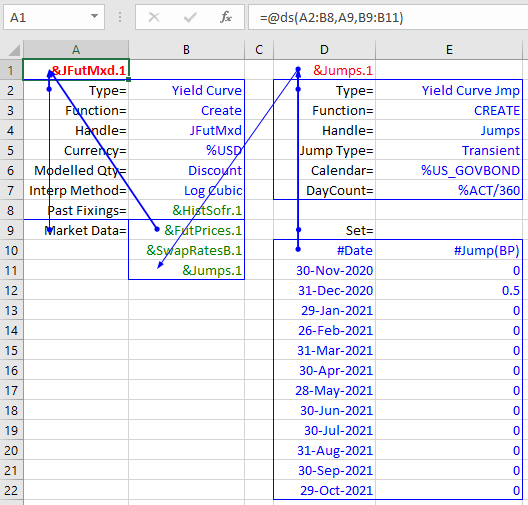 Forwards Implied by a Yield Curve that Incorporates a Single Overnight Rate Jump of 0.5 Basis Points at Year End

It exhibits the jump exactly as expected.

No noticeable shift of the other forward overnight rates in relation to their earlier seen values is discerned, as any such effect is expected to be very small. 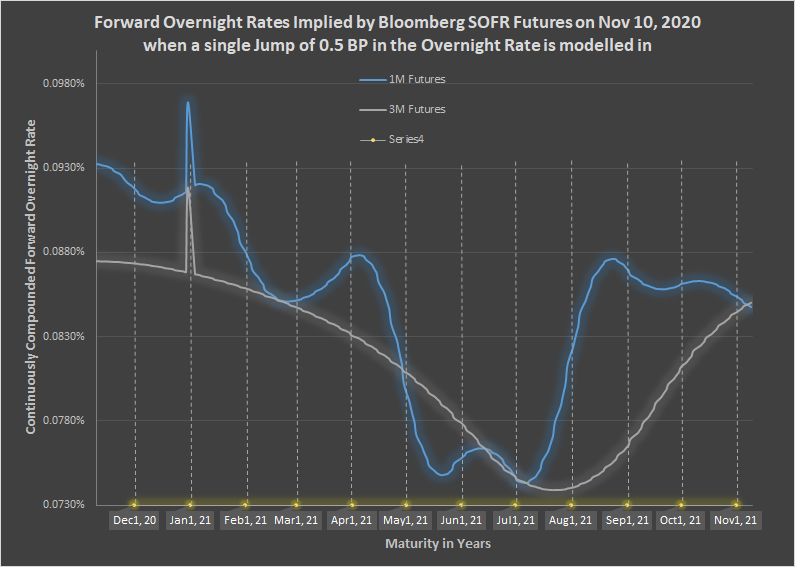 A very small drop on both curves is observed on the dotted vertical line passing through January 1, 2021.

It is a drop rather than a hike because on each date the forward-looking 3-month rate is observed. It would have been a hike if the backward-looking rate had been depicted.

The drop is so small because the jump of 0.5 bps affects only one of the about 65 overnight rates that are compounded to form the depicted 3-month term rate. 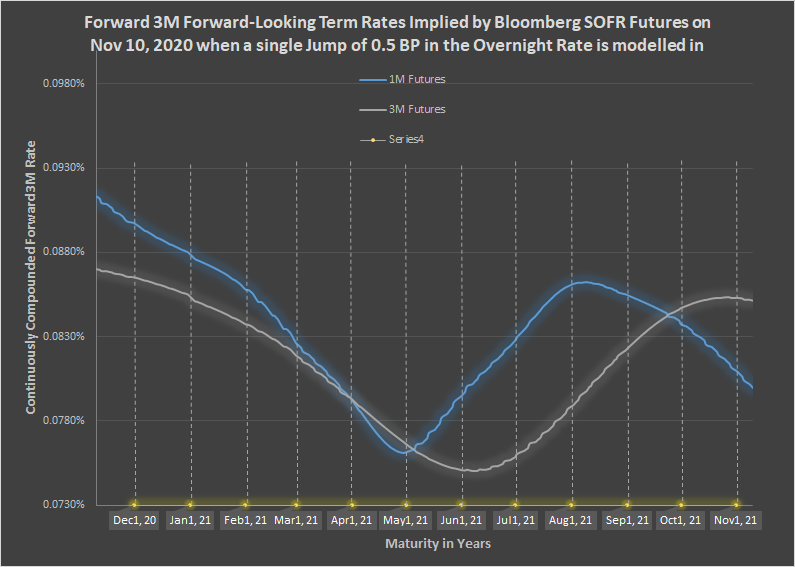 The following chart shows the term structure of the implied zero rates.

A small hike on both curves is observed on the dotted vertical line passing through January 1, 2021.

The jump size is more pronounced than that of the forward 3-month case because of the timing of the jump. It occurs on December 31, 2020, a date which is about half a distance away from today than the 3-month interval that underlies the forward 3-month rates. 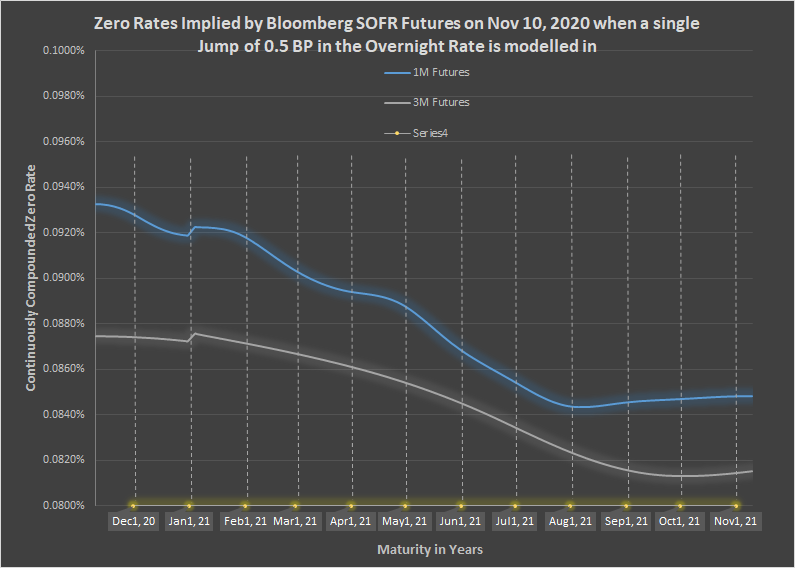 The earlier the jump date, the bigger its impact on the zero rate curve is.

For example, if the jump were specified to occur on the next business day from today, i.e. on November 12, 2020, the zero rate curve would exhibit a big size jump as shown below: 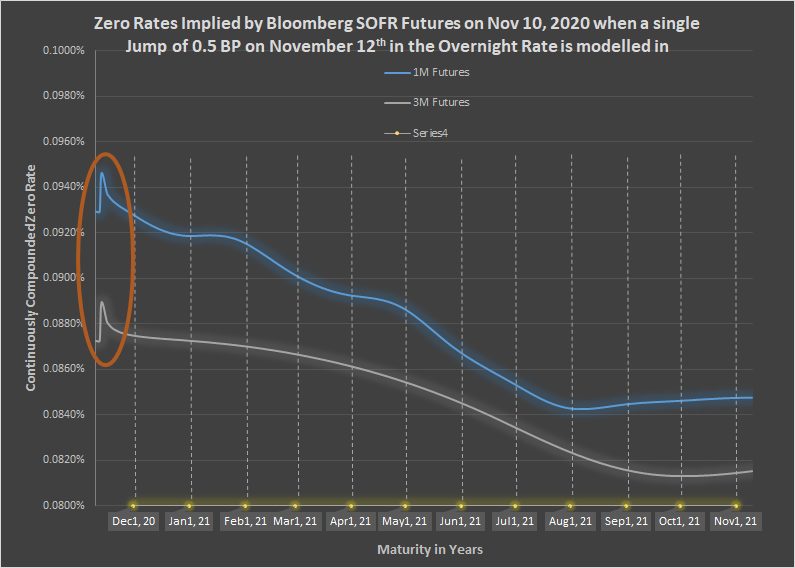 Now that we have seen what jumps are and how they may be applied, it is time to look at what extent they may or may not apply in the SOFR market.

Historical data on published daily SOFR values can be found online at https://fred.stlouisfed.org

Pulling the data over the range of the past year, I get the following chart of the daily differences of the published SOFR values, expressed in basis points: 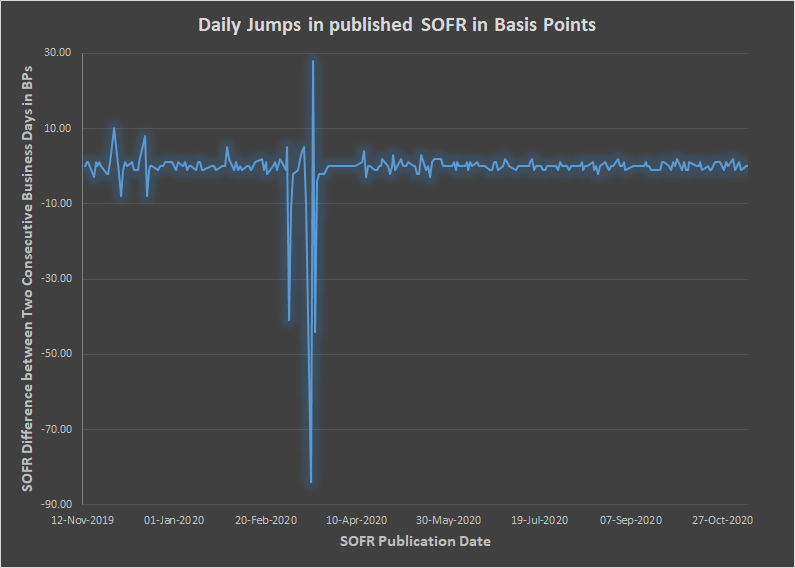 The huge drop on March 16, 2020 for 84 basis points is due to … corona. On that day, stock markets around the world crashed as a result of impeding widespread lockdowns and SOFR rates followed suit dropping precipitously as markets thought there will be … no tomorrow!

Apart from that - hardly predictable by non-politicians - rate drop (allow me some humor here), no discernible turn-of-the-month pattern can be observed.

Looking at the data though, I could see that there seemed to exist a positive jump one or two basis points on most of the month-end dates, but not on all of them.

I felt, it would be highly unlikely for the market to price in future SOFR turn-of-the-month jumps, given the fact such jumps are not clearly observed in the recent past data.

Nevertheless, I tried to set various jump sizes on the month-end dates with the hope of getting smoother implied forward curves, but to no avail.

For example, below are the charts produced after setting a jump of 0.5 bps on all month-end dates.

These charts indicate that the incorporation of an end-of-month flat jump fails to eliminate the humps in the forward overnight and 3-month term rate curves implied by either the 1-month (blue curve) or 3-month (grey curve) SOFR futures. 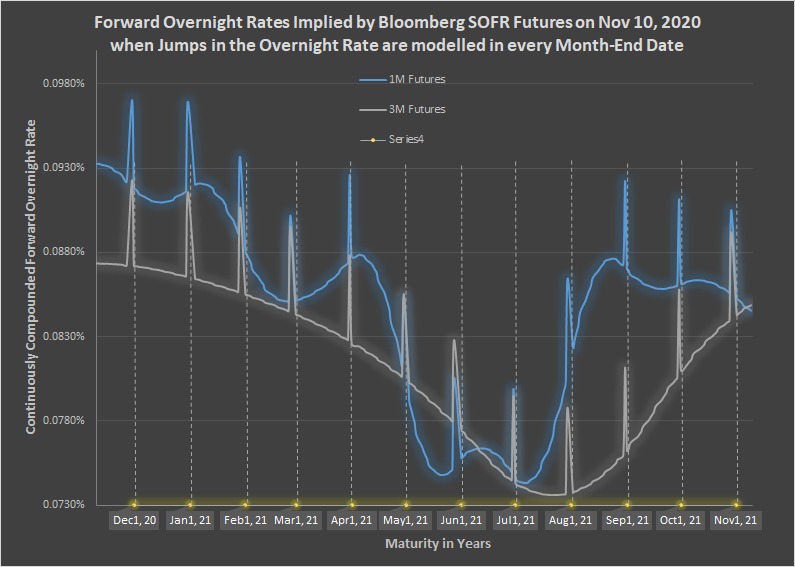 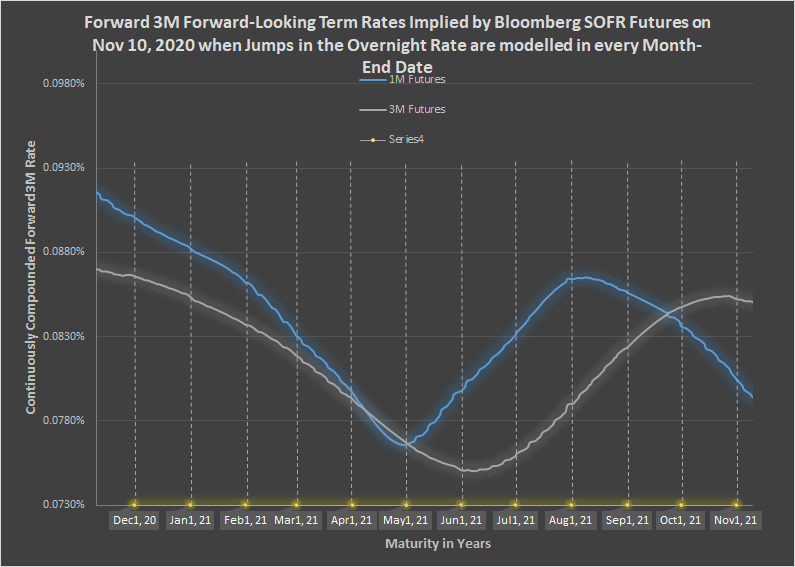 Tweet
Libor Cessation: Price and Risk of existing Vanill...
How to build a SOFR Yield Curve in Excel using Qua...