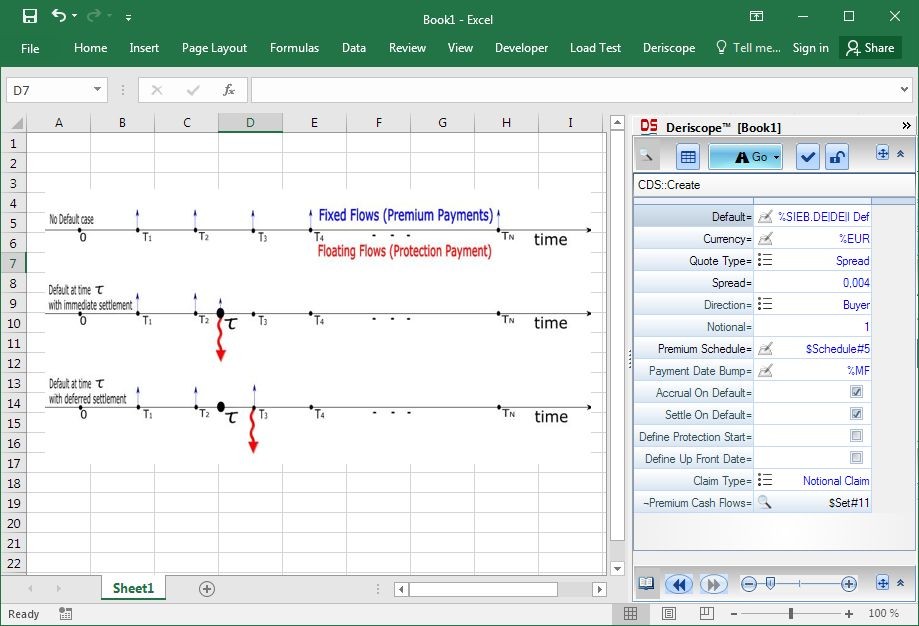 A CDS contract specifies N payment times T1, T2, …, TN at which, counterparty A (the Protection Seller) receives a pre-agreed fixed amount from counterparty B (the Protection Buyer) provided that a pre-defined credit event – such as the default of some specific issuer with respect to a bond issued by that issuer - has not taken place.

Otherwise, if the credit event occurs then the swap is terminated and the protection seller A is obliged to compensate B either in cash or by buying the referenced bond from B at par.

If B is in possession of the referenced bond then the CDS contract can be regarded as an insurance contract undertaken by B as protection against a future sudden devaluation of the referenced bond due to an issuer's default. In this case, the regular fixed amounts paid by B at times T1, T2, …, TN are the insurance premia for the assumed protection.

Still, a CDS is considered to be a derivative rather than an insurance contract because there is no requirement that the protection buyer B possesses the referenced bond.

The stream of cash flows paid by the protection buyer is called the fixed leg or premium leg of the swap.

The single contingent cash flow paid by the protection seller is called the floating leg or protection leg of the swap.

The diagram below shows the timing of the various contingent cash flows: 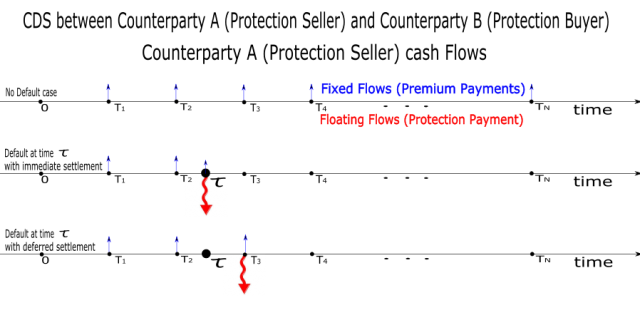 I can use the wizard to produce a formula creating a CDS object in only 13 seconds, provided I am happy with the default assignments, as shown in the video below:

The produced formula together with the formula responsible for the time schedule of the premium leg is shown below. Note this compact form displays only the mandatory input parameters. I can view all parameters – both mandatory and optional – inside the wizard by selecting the cell A1 holding the handle name of the created CDS object. 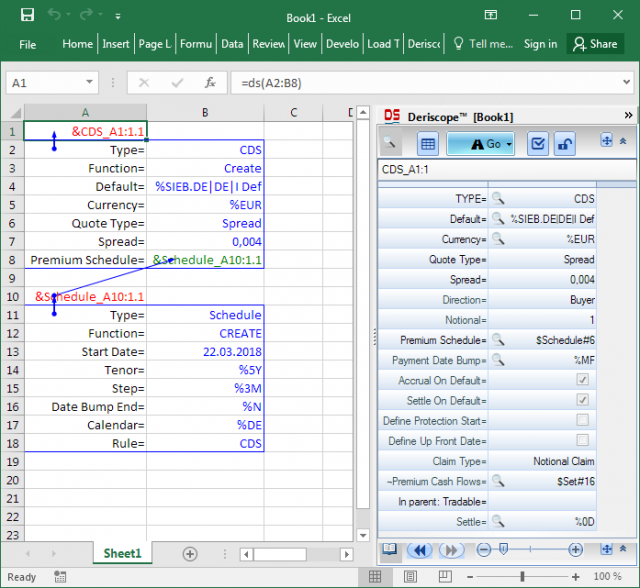 The next video shows how I can instruct the wizard to build the formulas so that they include all input parameters.

Note in particular the two additional entries that appear as soon as I change the Quote Type input from Spread to Up Front.

During the construction, a useful intermediate output called ¬Premium Cash Flows allows me to see the premium payments implied by my existing entries.

and this is how the pasted formulas look like: 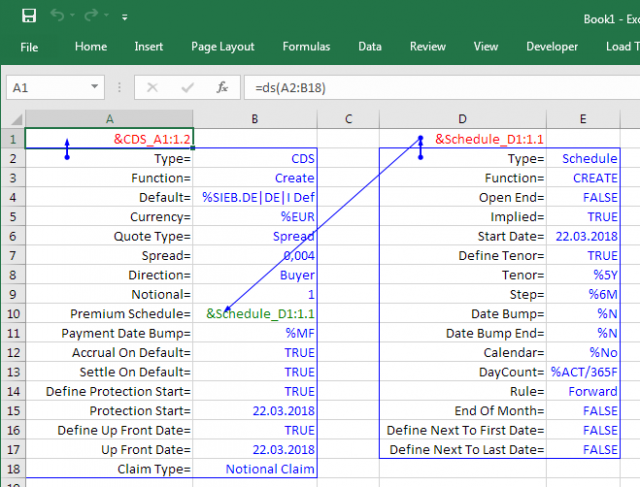 As you see, cell A1 contains the formula =ds(A2:B18), which takes one input argument and returns the text &CDS_A1:1.1

The prefix & indicates that &CDS _A1:1.1 is the handle name of some object. In fact it points to an object of type CDS.

The input range A2:B18 contains the input, of which the most important keys are described in the table below:

I can always access detailed information on any key-value pair by selecting the respective cell as this video shows:

Browsing the contents of a created CDS object

​The contents of the object in cell A1 are immediately visible in the range below it.

But imagine I am using this object in another worksheet through a link.

Then I can still see the object's contents as soon as I select the respective cell as the following picture demonstrates. 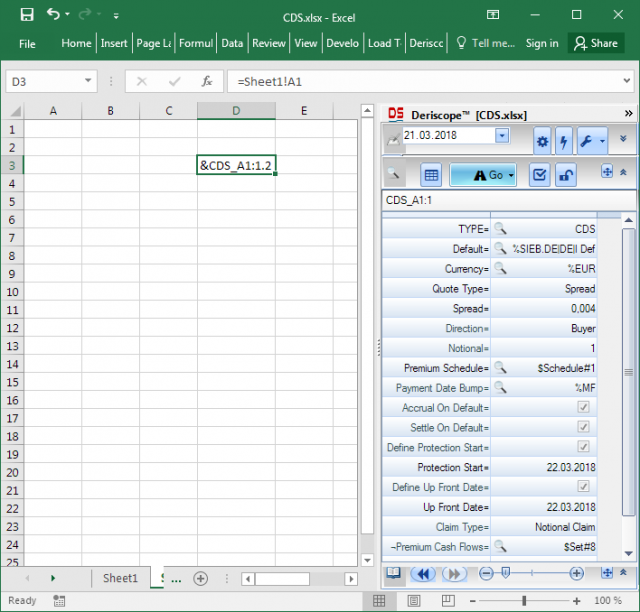 Looking inside the wizard, I cannot only verify important parameter values, such as Spread = 0.004 but I can also browse through deeper details by clicking on the respective lens symbols.

For example, if I click on the lens symbol of the cell next to Premium Cash Flows I see the following: 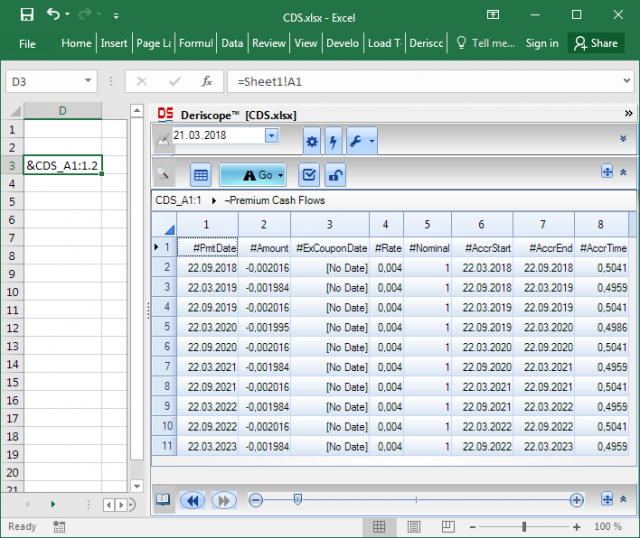 Deriscope supplies through QuantLib the following three functions that can be called from a given CDS object:

Cash Flows: Returns the cash flows of the premium leg.

Note that the Price function may also return several other values beyond the price of the swap by setting the value for the Output key accordingly. More on that below.

Implied Hazard Rate: Returns the flat hazard rate that would cause the given CDS to have the quoted price.

Then a credit curve is constructed taking as input a flat hazard rate equal to the one found above.

Finally the fair spread (i.e. the running premium that makes the CDS have zero price) is calculated and returned.

The following video shows how I use the wizard to generate in only 8 seconds the 5 spreadsheet formulas required by the Price function:

Below is the spreadsheet image with the pasted function in cell G1 that returns a CDS price of -0,004350485. The 5 newly created blocks are clearly visible. 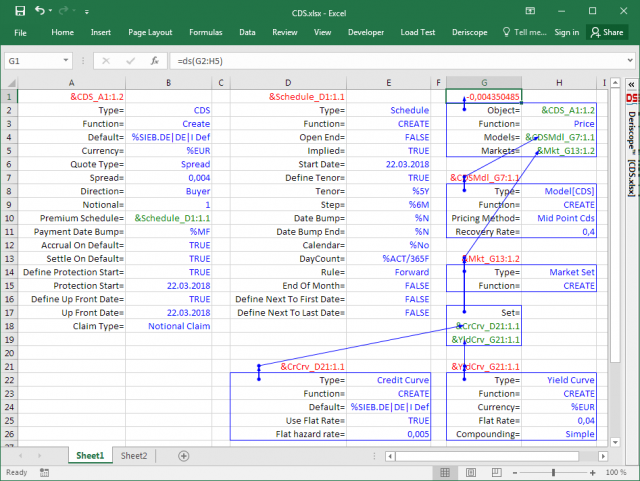 You notice the two bottom blocks contain the wizard-generated default credit and yield curves, both set with flat rate for simplicity.

I can obviously replace them with more realistic, market-calibrated non-flat curves.

I may change it to another method.

If I select the key-containing cell G10, I read off the wizard that there exist the following three different methods available:

During the price calculation, QuantLib also computes certain values that can be of interest.

When cell G1 is selected, the wizard displays the following in its Info Area: 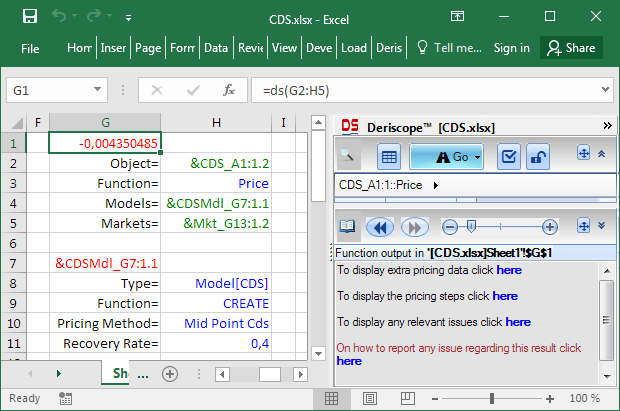 If I click on the here hyperlink of the top sentence "To display extra pricing data click here", I see the following: 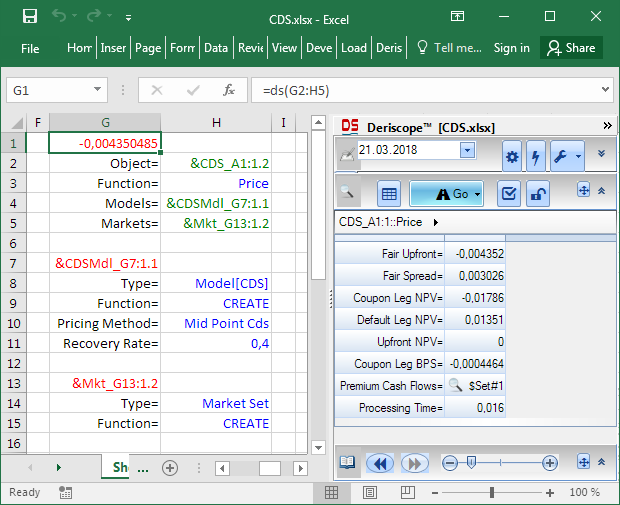 As you see, beyond the cash flows I can also see the Fair Upfront, Fair Spread, NPV and BPS as well.

I have already explained here how I may transfer these data in the spreadsheet.

It is also possible to track the pricing algorithm that has been run in order to produce the observed output and also see the actually used intermediate QuantLib structures and numerical outputs as described in the respective section of my Interest Rate Swap article.

A youtube video with voice narration on the Isda Cds method is available below.